Whether you’re looking for a microphone for vlogging, podcasting, voiceovers, or general home studio use, the new PreSonus Revelator USB microphone makes it easy to get polished, professional sounding-results with great sounding presets, easy-to-use loopback audio, and selectable polar patterns. Whatever your application, Revelator will adapt to fit your needs.

The secret to a “radio sound” is a combination of the right talent and microphone with just the right amount of EQ and compression. Revelator makes it happen with the same EQ and compression algorithms found in PreSonus’ award-winning StudioLive Series III mixers.

Eight easy-to-use, professional crafted presets give you that radio sound with the press of a button, with the right combination of EQ and compression to make your voice stand out. Eight additional user presets are provided to make Revelator sound that’s all your own using the full StudioLive Fat Channel controls available in Universal Control. You also get a wealth of voice effects to create just about any crazy sci-fi sound you want. Even better, you can store up to four presets to be instantly selectable via the Preset button on Revelator!

More than a USB microphone, Revelator also features two stereo streams for loopback audio so you can quickly and easily conference in Zoom calls, record gameplay, or showcase the audio in a YouTube video while adding witty commentary.

Two streams for loopback audio mean you can mix and record the audio from two different applications on your computer, along with your voice, at the same time using the intuitive interface Universal Control. Built-in monitoring and an onboard headphone amplifier let you listen to your performance and mix in real time.

Three pickup patterns provide maximum flexibility. Use the cardioid pattern for voiceovers or performances where only one voice should be captured.

Doing a podcast interview in person? Change to the figure 8 pattern and position Revelator between you so one side will pick up the interviewer and the other will pick up the guest. Doing a roundtable discussion or recording multiple instruments? Switch to the omnidirectional pattern to pick up sound all the way around the microphone.

With its bus-powered USB-C compatible design, makes connecting Revelator connecting to a Windows or macOS computer and Android or iOS tablet a breeze, and it comes with PreSonus’ popular Studio One Artist recording production software and Studio Magic Software Suite. An integrated desktop stand with built-in cable management and elegant aesthetic keeps your broadcast space clean. 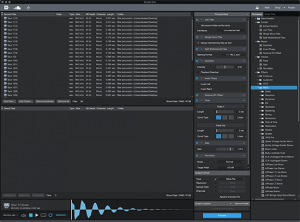 Audio Batch Converter’s integrated browser allows the user to create and edit processing chains via the same drag-and-drop workflow Studio One users are already accustomed to. You can even tweak effects during a real-time playback, and an integrated Preview Player lets you quickly preview and A/B compare unprocessed and processed signals.

With its wide range of applications, PreSonus’ Audio Batch Converter for Studio One is an excellent tool for electronic musicians, audio engineers, sound designers, podcasters, voiceover artists, and more. It is available in the PreSonus Shop for $49.99 U.S. 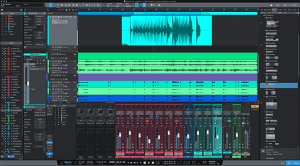 PreSonus is now shipping Studio One 4.5, a major update to its powerful yet easy-to-use recording and production software. With more than 70 new features and improvements, this free update for Studio One 4 users adds several of the most requested features from the Studio One user community and adds advanced tools that streamline professional audio and MIDI production workflows.

All audio and instrument channels, effects channels, and buses also feature gain and phase controls so you can manage perfect levels across the entire mix without increasing event gain.

Grouping has been completely redesigned. Groups now have attributes for defining edit groups or mix groups using attributes for Volume, Pan, Mute/Solo, Inserts, and Sends. Groups can be nested and can be easily edited and activated/suspended with one click. A dedicated command can globally enable/disable all Groups at once.

Setting up an external audio interface is a lot easier thanks to several I/O setup improvements. Add any number of new inputs and outputs in just one step, including custom naming and coloring. Inputs and outputs can be reordered with simple drag-and-drop. Users who switch interfaces, move between studios, or collaborate will appreciate the new Import and Export options for I/O setups.

The new update adds many other important features and enhancements. For instance, the Chord Selector now offers a convenient Audition mode. Individual Audio Events, Audio Parts, and Instrument Parts in an arrangement can now be locked to prevent unintentional moving or editing, and you can even lock entire tracks.

For more information about what’s new in Studio One 4.5, please visit PreSonus. 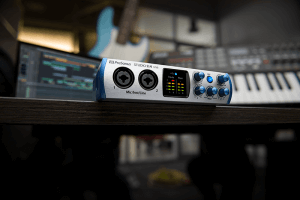 Equipped with PreSonus XMAX-L solid-state preamps and high-end converters, the newest member of the company’s Studio series delivers professional quality audio in a rugged, compact, all-metal enclosure that can withstand the stresses of travel.

A complete, all-in-one recording solution, the Studio 24 comes with PreSonus’ award-winning Studio One Artist music production software for Mac and Windows. Studio One integrates tightly with PreSonus interfaces, configuring automatically – no need to map inputs and outputs. You also get the Studio Magic Plug-in Suite, a carefully selected plug-in collection from the leading names in virtual instruments and effects.

The USB-C port and balanced, 1/4-inch TRS, line-level main outputs grace the rear panel, and an output level control is provided on the front. MIDI I/O enables connection to a keyboard, sound module, or control surface. USB-C-to-C and USB-C-to-A cables are included.

The PreSonus Studio 24 USB-C audio/MIDI interface is available immediately at PreSonus dealers for a U.S. street price of $149.95. 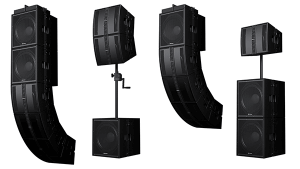 PreSonus Audio Electronics has introduced the CDL-Series loudspeakers, the latest addition to the company’s line of innovative sound reinforcement designs.

The result of years of research and development, the CDL12 Constant Directivity Loudspeaker combines the best attributes of a point source and line array technology into a unique patent-pending design, with consistent SPL throughout the frequency response range, both on-and off-axix.

The companion subwoofer, the CDL18s, utilizes an innovative ported design that maximizes efficiency to create a big bass sound from a compact cabinet. Both Dante-enabled, powered enclosures can be flown as a vertical array, or combined for ground-stacked applications to create a complete, coherent loudspeaker system with an even response across the frequency spectrum.

Each CDL12 consists of eight 2-inch drivers aligned in a segmented circular-arc high-frequency array centered in front of the low-frequency driver travels from the same acoustic axis as the high-frequency array so that the pattern always radiates from the center of the CDL12- whether used individually, or as part of an acoustically coupled vertical array with up to six enclosures.

Because of this, the CDL12 avoids the near filed anomalies that can interfere with the sound quality of a traditional line array. This makes the CDL12 ideally suited for a broader range of venue sizes, creating a far-field response almost immediately as the sound is projected from the center of the enclosure.

The CDL18s features a unique port configuration that maximizes efficiency to create big bass sound from a compact cabinet. Each of the four triangle-shaped ports is places in a corner so that it couples to the cabinet, using the side walls to effectively elongate each port and allowing the CDL18s to move air in a compact enclosure.

Although a keyboard and mouse are tried-and-true DAW-control devices, they’re far more effective when used in tandem with the FaderPort’s precise tactile control over mix and automation functions. A superior solution for anyone who mixes in the box, FaderPort provides a 100mm touch-sensitive, motorized fader for writing fades and automation in real time and 24 buttons covering 40 different functions, all in a compact chassis that easily sits on any desk.

FaderPort lets you quickly zoom in on audio files for editing, and control track levels with the touch of a finger. PreSonus incorporated elements from their award-winning FaderPort 8 into their new and improved FaderPort. Rather than forcing you to revise your mixing method, the FaderPort augments the way you currently mix.

The FaderPort’s unique Session Navigator provides easy access to eight mission-critical functions for maximum flexibility. Use the larger encoder button and companion buttons to edit and mix with greater efficiency and speed.

We have an announcement… Introducing the New FaderPort. pic.twitter.com/0w0fSrvWKG

For years, Firewire was the reigning technology when it came to sending multichannel audio to/from an interface and a computer or other host device. While it’s still technically possible to use Firewire in many instances, the protocol is clearly giving way to other connection types like Thunderbolt and USB 2.0 (and probably down the line, USB 3.0). With that in mind, I was recently in search of a new USB 2.0 mixer. I wanted the ability to send multichannel audio to my computer for recording, and my current mixer, equipped with a USB 1.1 connection, could only send two audio channels. I began searching around for new gear options and was frustrated by just how difficult it was to find mixers and interfaces that met this requirement. After hours of searching and some suggestions I received on a couple of different podcasting-related forums, here’s the list of all USB 2.0 mixers and interfaces I could find that sell for less than $1000US.

That’s all of the multichannel USB interfaces/mixers I could find for under a grand. Did I miss any? If so, leave the information in the comment section below. 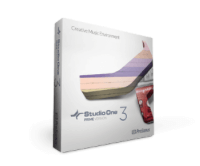 PreSonus is offering its Studio One 3 Prime audio and music production software for free. It is a feature-rich digital audio workstation that comes with some bundled content. Those that are new to audio production, and those who are seasoned audio producers who are unfamiliar with PreSonus, may want to check out this free version of PreSonus’s cross-platform DAW.

Unlike other free versions of software, this one does not time out, does not have a nag screen, and does not limit the number of songs that you can create. It is based on a the full version of Studio One.

In addition, this deal comes with bundled content. The Presence XT Sample ships with a 1.5GB library. It gives you access to 9 PreSonus Native Effect plugins (including Ampire, Beat Delay, Chorus, MixVerb, and more.)

Studio One 3 Prime offers an elegant single-window work environment that has drag-and-drop functionality and multi-touch support. (A multi-touch enabled monitor is required for touch operation). It comes with unlimited audio tracks, MIDI buses, and FX channels. It also has the new Presence XT expandable sampler with essential sound library.