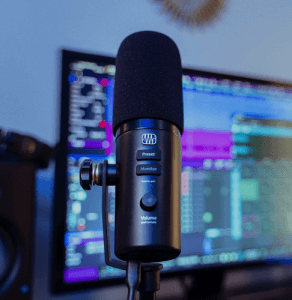 PreSonus announced the Revelator microphone. It is “a studio in a mic” and more than a USB microphone. PreSonus describes it this way:

Every musician knows the secret to a great sound is a great microphone, and at its core, Revelator delivers the professional performance you’d expect from a studio microphone. But we didn’t stop there. Revelator’s mixer features compression and EQ modeled on world-class analog processors. An independent reverb bus lets you add just the right amount of shimmer to your sound. Two stereo loopback channels make it easy to add backing tracks and more. When you’re looking for the ultimate live streaming and home recording set-up for singer-songwriters, look no further than Revelator.

Revelator is the first USB microphone to provide State Space-modeled analog processing onboard with the same Fat Channel gate, compressor, and EQ their StudioLive Series III mixers offer. You can enjoy extensive, studio-style processing whether recording in the studio or streaming live. And once you’ve dialed in that perfect sound, you can save it as a preset to use over and over again at the press of a button. An independent reverb bus lets you add shimmer to your performance with ease. Like what you hear? All processing can be printed to your recording, or just used for your monitor mix, you decide.

A Mic For Any Occasion

For performances when you’re recording solo, use Cardioid Mode to pick up the sound you want and remove the sounds you don’t.

Recording with a friend? Change to Figure 8 Mode to use one side of the mic for you and the other for your partner. This is ideal for duos where one person is singing and the other is playing guitar.

Recording with a few friends? Switch to Omnidirectional Mode to pick up sound all the way around the microphone, perfect of those campfire-like jam sessions.

Whatever you’re recording, Revelator can adapt to fit your needs.

Add Some Backing Tracks to Your Live Stream

Gigging musicians know that a powerful way to add backing tracks to a performance is with a digital mixer. That’s why PreSonus built one into Revalator! Open up Universal Control and you’ll find an easy-to-use loopback mixer that lets you quickly route backing track audio from your DAW of choice to your live stream. This is also a great rehearsal tool; letting you listen to sketches, new songs, and more all while monitoring at zero latency through studio-quality compression and EQ that will bolster your confidence.

The PreSonus Revelator is natively compatible with Apple Silicon-based Mac computers, as well as iOS and iPadOS devices, including iPadPro, iPad, iPad Air, iPad Mini, iPod Touch, and iPhone. Because it’s USB class-compliant, there are no special drivers or applications to download and install. You’ll be able to produce on the go – everything from podcasts to folk rock to trap – wherever sound takes you.