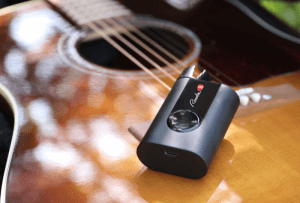 Roadie 3 is made by Band Industries. Three years ago, they released the Roadie 2 and Roadie Bass. Those products received massive support from their buyers and triers. Now, they have pushed things to the next level for Roadie 3. It is currently on Kickstarter, is fully funded and has four days left.

Roadie 3 can tune almost all instruments with geared pegs in just seconds. This includes electric guitars, acoustic guitars, classical guitars with nylon strings, pedal steel guitars, ukuleles, mandolins, and banjos, to name a few. If you play the bass guitar, use Roadie Bass.

Band Industries has completely revamped and sped up how Roadie 3 helps you change strings. Roadie 3 will now very quickly wind your new string to tension with a motor speed of 120 RPM and then tune it up, all in one smooth step.

A specialist coating on the robust canvas fabric, along with a rubberized zipper, provides optimal splash protection. The compact bag is suitable for the Leica V-Lux, the Leica Q2, or the system camera CL, TL2 and M with a mounted lens of up to 90mm focal length.

An interior pocket with fastener accommodates additional batteries, SD cards or filters. With its broad shoulder strap, the Ettas bag provides utmost comfort while ensuring that the camera is always readily at hand. A special clip on the back of the bag provides the option of attaching your camera straight to your belt. 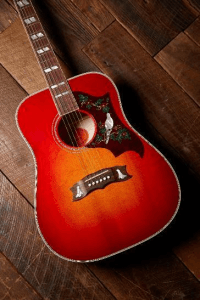 By leveraging its iconic past and leaning into an innovative future, Gibson has set the stage for the next era of shaping sound for present and future generations. Gibson is proud to announce a new acoustic collaboration with Frank Hannon, the acclaimed solo artist, guitarist, songwriter, and co-founder of the multi-platinum band TESLA. The new Frank Hannon ‘Love Dove’ acoustic guitar marks Frank’s first signature guitar in his 35-year music career and is now available worldwide at all authorized Gibson Dealers.

Frank used his 70’s era Gibson Dove to write and record numerous songs, including the TESLA hits “What You Give,” “Stir it Up,” he also recorded the celebrated intro to the ballad “Love Song” for the “Times Makin Changes” video collection. After trying many acoustic guitars, it’s the Gibson Dove model that Frank has faithfully used to record and tour with for the past 30 years. The new “Love Dove” model guitar can be seen and heard on TESLA’s latest release 5 Man London Jam recorded at the world famous Abbey Road studios, and it is filled with love, power and performance like Frank’s lyrical, vocal and musical prowess.

The Frank Hannon “Love Dove” acoustic guitar is highly customized featuring a thermally Aged Sitka spruce top, married to a maple back and sides, allowing for supreme response and resonance. A 70’s era Dove bridge with scalloped wings decorated with mother-of-pearl wing inlays adorn the center, and the highly desirable Dove pick guard features hand-engraved and painted details. Each “Love Dove” comes in Vintage Cherry Sunburst and is commemorated with a signed inside label by Frank Hannon and custom Love engraved truss cover written by Frank himself. 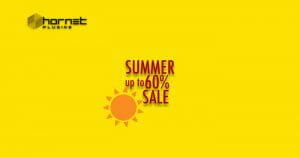 HorRNet Plugins announced that they are having a Summer Sale that started on June 18, 2020, and will end on June 21, 2020. The limited-time sale offers 60% off plugins and 30% off bundles. It has become common for companies that make things used by professional music makers to suddenly release short sales during the summer.

We are having a 60% Summer Sale right now!

Starting from June 18th and through June 21st every HoRNet plugin (except the new Total EQ) will be available with 60% discount, all the bundles have a 30% discount.

Have a look at the countdown on our website to not miss the chance to get our plugins for less than half their original price.

Visit the HoRNet Plugins website for full details. There are a total of four pages worth of products that are included in the Summer Sale.

With an ultra-high definition source signal connected to the 12G-SDI or HDMI 2.0 video inputs, the VC-100UHD will automatically process and convert it to different resolutions, ready for distribution at 12G-SDI, HDMI, and USB 3.0 rear-panel outputs. Thanks to Ultra Scaler technology, system designers can simultaneously deliver 1080p video at rates up to 240 Hz for a gaming monitor, 59.94/50 for an HD video system and LED displays, and 59.94/50 Hz for an HD livestream broadcast.

The VC-100UHD also includes built-in visual effects, allowing users to rotate, flip, trim, and mirror images on each output. And with Frame Synchronizer an Genlock features, video images can be re-clocked and stabilized as needed.

Along with video, the VC-100UHD can process embedded digital audio from its 12G-SDI and HDMI 2.0 inputs. Analog I/O is provided as well, with balanced audio on a 25-pin D-sub connector for installations and line-level stereo audio on RCA jacks for prosumer video gear. The advanced audio patching system lets users route and embed/de-embed up to 16 input channels and output up to 8 channels. An adjustable delay is also provided on each output to correct lip sync issues.

The VC-100UHD works as a portable processor for grab-and-go productions, or can be installed in a rack for use in larger systems and fixed installations. The unit’s rich integration capabilities include custom EDID on HDMI, 24 video test patterns, an audio test tone generator, system backup via USB memory, and remote control support over LAN. 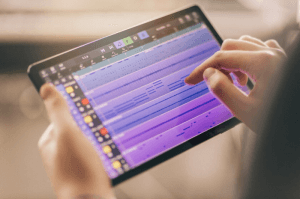 Steinberg has released its first mobile DAW app for Android: Cubasis 3 is the award-winning DAW for handheld devices, previously only available for the iOS platform. With Cubasis 3 now running on Android, Steinberg’s music production app is accessible to the majority of smartphone and tablet users.

Cubasis 3 offers great new features and enhancements for quick and easy results in recording and producing music. Group Tracks combines multiple tracks so that they can be processed and mixed as though they were a single track. The Cubasis mixer takes advantage of the display’s real estate, including useful zoom modes and an accurate level metering for every track. Users can add up to eight insert and eight send effects in Cubasis.

Many other feature additions and capabilities in Cubasis 3 include:

Cubasis 3 is purchased as downloadable app through the App Store and Google Play. The price is US $49.99.

Leica Camera AG presents a new color version of the Leica D-Lux 7 compact camera. The new Leica D-Lux 7 black with a discreet black body and lens, is available now. The classic look of the compact camera makes it the perfect companion for any occasion, capturing unique moments in stunning image quality.

In its technical specifications, the Leica D-Lux black corresponds to the existing series model and impresses with the same extensive equipment package, versatile functions and intuitive operating concept. The powerful compact camera is equipped with the fast zoom lens Leica DC Vario-Summilix 10.9-34 mm f/1.7-2.8 ASPH (equivalent to 24-75 mm in 35 mm format) and, in combination with the four-thirds sensor, delivers outstanding image quality in all shooting situations. Features such as touch screen, Bluetooth or charging via USB make it an extremely flexible camera that offers photographic freedom and captures every special moment.

By simply connecting to the Leica FOTOS App, the D-Lux 7 can be remotely controlled from the smartphone to transfer the photos to iOS and Android devices. Photographers can then make use of numerous options for sharing their pictures directly in social media or after processing them with an image editing or post-processing app.

As perfect complements to the classic looks of the Leica D-Lux 7, its users can choose from a collection of equally stylish and practical accessories such as exquisite cases, high-quality carrying straps and a practical handgrip. 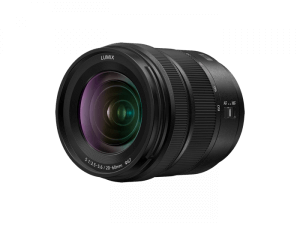 The new LUMIX F3.5-5.6 is a compact, lightweight standard zoom lens that covers from ultra-wide 20mm to standard 60mm focal length for versatile use including landscape photography. The wide viewing angle makes it easier to shoot indoors where space is limited and stunning close-up capability of 5.9 inches / 0.15m (maximum magnification 0.43x) supports still life photography. The new LUMIX S 20-60mm F3.5-5.6 also ensures smooth, high quality video recording because of a mechanism that suppresses focus breathing, which can be an issue in interchangeable lenses designed for still image photography.

With 11 elements in 9 groups, the use of aspherical lenses and 3 ED (Extra-low Dispersion) lenses effectively suppresses both axial chromatic aberration and chromatic aberration of magnification. Astigmatism is also corrected with these aspherical lenses, achieving high resolving performance. Furthermore, a UHR (Ultra-High Refractive Index) lens achieves uniform image quality from the center to edges of the image while contributing to downsizing of the lens unit.

With its compact, approximately 12.3 oz / 350g of light weight, the LUMIX S 20-60mm F3.5-5.6 features stunning mobility. The rugged dust/splash resistant design withstands use under harsh conditions even at 14°F / -10°C for high mobility. In addition, a fluorine coating on the front element repels water and oil and prevents them from attaching. The filter diameter is 67 mm, with a 9-blade circular aperture diaphragm. 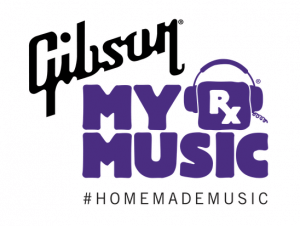 Gibson, the world’s most iconic guitar brand, has teamed up with MyMusicRx, flagship program of the Children’s Cancer Association (CCA), to bring the healing power of music to kids facing cancer and other serious illnesses.

Help support this worthy cause with a donation, and you could win one of six Epiphone, Gibson, and Kramer guitars PLUS interactive guitar lessons through a year-long subscription to the Amped guitar learning app and a swag bag full of Gibson merch!

Your generous donation will directly support MyMusicRx’s free music medicine programs for hospitalized kids and teens. These tailored, one-on-one music experiences are designed to relieve their stress, anxiety, and perception of pain, allowing kids and teens to improve their mental and emotional well-being through the healing power of music.

The Sweepstakes is only open to legal residents of the 50 United States (excluding New York), the District of Columbia, countries in the EU, U.K., and Canada who are 18 (except 19 on Alabama and Nebraska and 21 in Mississippi) years of age as of the date of the entry or legal age of majority or older in their country of residence.

Canadian winners will be required to correctly answer a mathematical skill testing question as a condition of receiving a prize.

Sweepstakes is void in Cuba, Islamic Republic of Iran, Iraq, Democratic People’s Republic of Korea, Myanmar, Sudan, Syrian Arab Republic, the Province of Quebec, and any place where offering the sweepstakes or awarding of a prize is prohibited. 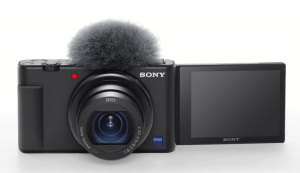 Sony Electronics announced the new pocket-sized digital camera ZV1, a lightweight, compact “all-in-one” style solution. Designed from the ground up for content creators and vloggers, the ZV-1 combines easy-to-use features with uncompromising imaging technology, making this the perfect tool for any content creator at all skill levels.

Despite the small form factor there are a multitude of pro-level movie making capabilities, including: