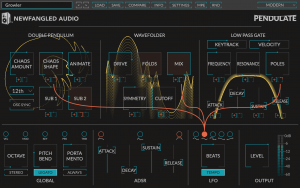 Newfangled Audio is happy to offer Pendulate for free on the Eventide website. Pendulate is Newfangled Audio’s first synth. It is a chaotic monosynth based on the physics of a double pendulum.

Pendulate is a monosynth in the “west coast” style, inspired by the ideas of Don Buchia. However, we’ve replaced the oscillator with a chaotic system based on the physics of a double pendulum. The result is a synth that can create biting basses, searing leads, and gritty textures.

Pendulate uses a brand new oscillator design to produce sounds different from any other synth. It features a chaotic oscillator based on a double pendulum. What initially looks random actually contains underlying patterns of interconnectedness, constant feedback loops, repetition, self-similarity, fractals, and self-organization. When designing the Pendulate oscillator, Newfangled Audio took great care to bring out these underlying patterns. The result is an oscillator that can smoothly fade from a sine wave to total chaos, with an expanse of territory to explore in between.