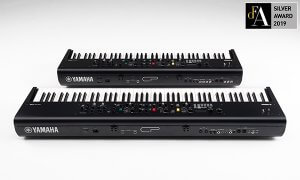 Yamaha Corporation announced that the Yamaha CP88/CP73 stage pianos were recognized by the DFA Design for Asia Awards with the Silver Award.

Powered by over 100 years of piano craftsmanship and 45 years of synthesizer innovation, the CP88 and CP73 stage pianos continue a rich tradition as the newest in the CP Series of keyboards designed for live performances. The CP88/CP73 stage pianos boast authentic acoustic and electric piano sound, realistic piano touch, and an intuitive one-to-one user interface. Durable, yet compact and light, the stage pianos are available in both 88-key and 73-key models.

The DFA Design for Asia Awards is a Hong Kong Design Centre program that was launched in Hong Kong in 2003 to celebrate design excellence and acknowledge outstanding designs with Asian perspectives. DFA awards are presented to companies and designers whose superior work reflects Asian lifestyles and who are influential in the design field.

In addition to the top prize – the Grand Award – and three other special awards, Gold, Silver, Bronze, and Merit Awards are presented to winners chosen from a total of 26 different categories. Yamaha previously received the Grand Award for its SILENT Brass in 2014 and its YEV electric violin in 2017.