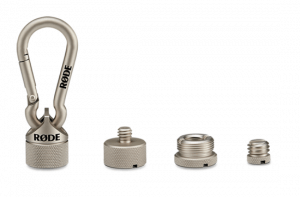 RØDE has introduced the Thread Adaptor, a premium universal adaptor kit for mounting a range of devices onto any mic stand, boom pole, tripod or studio arm. It features 1/4, 3/8, and 5/8-inch adaptors in a unique integrated set with a carabiner for safekeeping. These can be configured to connect any standard thread to any standard mount – a lifesaver on set, in the studio, or in the field – and it features a handy driver for tightening and loosening the adaptors.

The Thread Adaptor feature a bespoke design with a premium feel and finish – a must-have “everyday carry” accessory for sound engineers, filmmakers, and photographers.

There’s nothing more frustrating than when you’re on a set or in the studio and realize the thread size of your mic clip and stand don’t match up, or you need to mount your microphone but only have light stands available. The Thread Adaptor is a lifesaver in these moments.

Different combinations of the above threads can be used to create a wide range of thread conversions so you can adapt to any situation. The Thread Adaptor is made from durable stainless steel and brass and will last a lifetime. 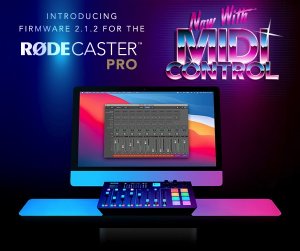 RØDE announced that they have released the next major firmware update for the RØDECaster Pro, making it even more powerful for podcasting and livestreaming. Version 2.1.2 gives you access to MIDI control for syncing the RØDECaster Pro with DAWs and streaming software, new sound pad modes, nine language options, and more. 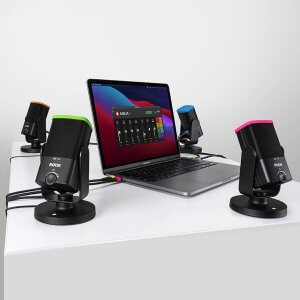 RØDE announced that RØDE Connect 1.1 is here! RØDE Connect is a simple and powerful software solution for podcasting and live-streaming with the NT-USB Mini.

Offering the ability to connect up to four NT-USB Minis to a single computer, RØDE Connect is perfect for anyone who wants to create professional-quality podcasts the easy way. With an intuitive recording interface inspired by the RØDECaster Pro featuring broadcast-style faders, level metering, sound pads, mute button, multi-channel recording and more, RØDE Connect gives you complete control over your podcast recording.

RØDE Connect is completely FREE to use. To get started, download the app from the RØDE website, plug in your NT-USB Mini, and get recording.

Unlock the full potential of the NT-USB Mini. RØDE Connect unlocks a hidden secret within the NT-USB Mini – powerful digital signal processing that gives you access to four different processors: a compressor and noise gate, plus the legendary Aphex Aural Exciter and Big Bottom effects that are found in the RØDECaster Pro and in the world’s top broadcast studios. All of these are accessible at the touch of a button and will make your voice shine.

RØDE Connect is only compatible with the NT-USB Mini. 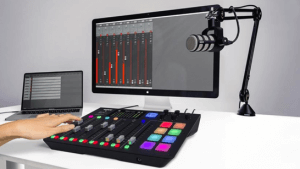 RØDE announced the public beta of the new RØDECaster Pro firmware is now available to download. It features MIDI control and more! The firmware update can be downloaded on the RØDECaster Pro website.

The RØDECaster Pro can now be used as a USB MIDI controller, opening up a wide range of creative possibilities for podcasting and streaming, including DAW synchronization in multitrack recording sessions, vision switching capabilities, and much more.

In addition to the Latch, Pause, Replay, Play and Loop modes, two new sound pad modes have been added – a “Swear Button” for bleeping out audio on the fly and a “Trash Talk” mode for muting the output to remote callers on the USB, smartphone, and Bluetooth channels.

This update includes an ASIO driver for ensuring a stable connection when using the RØDECaster Pro with DAWs such as Cubase and Adobe Audition on Windows computers. This can be downloaded separately from the RØDECaster Pro firmware page.

The RØDECaster Pro now offers a selection of languages for the LED touchscreen display, including Chinese, Spanish, German, Italian, French, Japanese, and Korean.

RØDE announced that a new firmware update for the RØDECaster Pro is now available. It can be downloaded for Mac or Windows from the RØDE website.

Version 2.1 is a major update that unlocks complete granular control over all processing parameters, more flexible podcast recording and export options, expanded multitrack capabilities, and an update to the RØDECaster Pro’s interface. These new features will give you even more control over your recordings! We have also improved the RØDECaster Pro Companion App.

Granular Control Over All Audio Processing: Previously, all of the audio processing has been controlled by a simple on/off toggle. For even greater control over your audio, RØDE has now included an “Effects Edit Mode”, which allows you to tweak all of the parameters of the compressor, noise gate, de-esser, APHEX Aural Exciter and Big Bottom, and high-pass filter. This will allow you to create a unique sound for your podcast.

The Master Bus Compressor: As well as the individual channel compressors, the RØDECaster Pro now features a master bus compressor. This is a compressor that is applies to the combined output of your RØDECaster Pro, including each mic input, the smartphone, USB and Bluetooth channels, and the sound pads.

Broadcast-style Level Metering: RØDE has also added the option to include broadcast-style level meters with precise dBFS markers to each of the channels on the home screen, giving you even greater control over your recording levels.

Sound Pad Overdubbing: Another new feature is the sound pad overdub mode. Audio that has been loaded onto the sound pads can now be overdubbed, allowing you to create layered sounds, record VOs over music, create custom ad rolls and more. 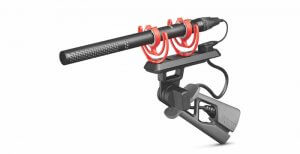 RØDE introduced the NTG5, a brand-new addition to their best-selling range of shotgun microphones. The NTG5 sets a new standard for the range. With a groundbreaking acoustic port design, ultra-lightweight construction, and crystal clear, broadcast-grade sound, the NTG5 is a revolution in shotgun microphone design – the perfect location recording mic.

The NTG5 is the next step in the range’s evolution – the culmination of RØDE’s 28 years of research and development of high-quality microphones for broadcast and film applications.

Key Features of the NTG5:

The first thing you will notice about the NTG5 is the striking new body. The design has been completely overhauled, with circular acoustic ports replacing the linear slots found in other shotgun mics. The revolutionary design is the result of many months of specialized acoustic testing that began during the development of the TF5 – RØDE’s new premium small diaphragm condenser mic designed in collaboration with legendary engineer Tony Faulkner.

The result is a shotgun mic with unmatched acoustic transparency, and a natural, uncolored sound that will sound superb in a wide variety of applications. The annular line tube technology intrinsic to the NTG5’s design sets it apart from all the other microphones in its category, and will see this microphone take its place as a future industry standard. 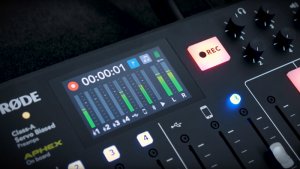 Powerful New Sound Pad Functionality: There is a new sound pad playback indicator button on the home screen of your RØDECaster. The icon indicates (by color) which sound pad is currently playing, as well as how much time that pad has before the sound ends. If you have multiple pads playing at once, the icon will show the pad that will end soonest.

There is also a handy shortcut to the sound pad configuration screen. The new firmware allows you to modify settings that you could previously only access in the companion app. A new playback mode called “Pause” allows you to pause playback by pressing the pad. The pad will blink to indicate it is paused.

You can now store up to 8 banks of sounds (64 in total). Super handy if you produce multiple podcasts or your show is very sound-focused.

New Broadcast-Ready Features: New features have been added for those who are using RØDECaster Pro in a broadcast context. You can now disable the main output level control knob on the monitor outputs. There is also a button to automatically mute the monitor outputs when faders are open to prevent feedback.

You now have the ability to switch the solo button to enable pre-fade listen mode. You will be able to hear what is coming out of that channel with unity gain, even if the fader is completely down. The “host”, (channel 1) can now speak with callers on the USB, smartphone, and Bluetooth channels without the conversation being recorded or going to monitor outputs. 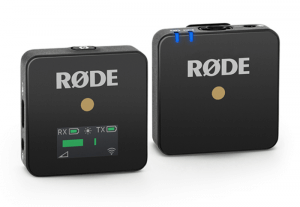 Doubling down on its all-in-one design, RODE implemented a capable internal capsule into the transmitter for clear audio capture. This pre-polarized and pressure-operated capsule features an omnidirectional pickup pattern and frequency range of 50 Hz to 20 kHz. Those looking to use professional lavaliers will appreciate the standard 3.5mm TRS input with a 20 Hz to 20 kHz range.

Both the transmitter and receiver have a clip for easy attachment to clothing and runs on a rechargeable internal battery that will run for up to 7 hours on a single charge. Powering up is handled through a USB-C connector and the Wireless GO will support external battery packs during operation for continuous use.

The receiver is different in that it has a 3.5mm TRS output for monitoring or connecting to recording devices, such as a camera or dedicated audio recorder. It also has a color LCD screen for viewing and adjusting settings.

Electronic media gathering in remote locations has become increasingly easier in recent years, mainly due to the versatility of mobile smart devices. Unlike a simple camera or digital audio recorder, a smart device can run apps that allow it to become a fully functional production studio. But most of these devices aren’t equipped with professional-level microphones. Equipment manufacturers have stepped in to bridge that gap. The latest to do so is Rode with the announcement of its i-XLR Lightning adapter that works with iOS devices.

The i-XLR connects any microphone to a Lightning-enabled iOS device using a three-meter long shielded audio cable. Having a cable this long allows the user to easily store their iOS device in a pocket or bag while having the mic out and ready to use. The i-XLR comes with a built-in headphone output for live monitoring and the device carries an additional 20db of input gain which is especially handy for use with dynamic microphones. The i-XLR also has a built-in record button as well as LED’s that show the record/pause status of a recording while being used with compatible audio apps.

The i-XLR is expected to ship later this year. Pricing has not yet been determined.