It’s easier than ever to create multitrack music productions. Devices like portable recorders, smartphones, and tablets allow musicians to do everything from capture song ideas to produce full multitrack compositions almost anywhere.

It seems only logical that an established music-production software company like iZotope would take advantage of this modern portable recording landscape. And the company has done just that with the recent release of its multitrack music-production app, Spire.

iZotope’s Spire app allows users to record up to eight tracks with “professional polish.” Spire also allows users to edit tracks to tighten up productions and create seamless loops. Spire users can then mix those tracks by adjusting individual track volume and pan settings. Users can also choose between mono or stereo playback. And finally, multitrack creations made within Spire can be exported to other audio-production apps for enhanced processing, or they can be uploaded to external services for further sharing and storage options.

iZotope’s Spire app may sound impressive enough just based on its features alone. But the most remarkable thing about Spire might be its price, as Spire is completely free! No in-app purchases. No weird registration requirements. Just download the app, and get to work producing your next musical masterpiece. 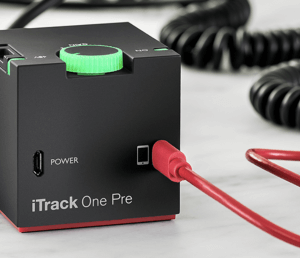 The iPhone has become a valuable tool for media producers. And while the device can do a lot on its own, it can be improved dramatically with external add-ons like microphones. Simply plugging a high-quality, dedicated microphone into an iPhone can raise the sound quality of audio and video recordings noticeably. But, it’s not always easy to find a microphone that’s compatible and/or easy to use with an iPhone. That’s where the new Lolly microphone comes in:

Lolly is compact and portable so you can easily slip it in your pocket. It’s also very user-friendly. You don’t have to be an audio engineer to have professional quality!

Lolly connects to an iPhone thru the phone’s Lightning port, so there’s no dongles or adapters to worry about if you’re using the microphone with a newer iPhone model. Lolly also works seamlessly with all iOS-based media production apps, including GarageBand, Instagram, Snapchat, Facebook, and Voice Memos.

Lolly is set to be released in the next few days. Follow the link at the top of this post to sign up for release announcements and more information on the Lolly microphone.

Musicians and audio producers are always looking for new ways to extend their sonic palettes. For years, creating new sound textures required racks full of hardware, or other effects processors that came in the forms of pedals or dedicated computer applications. But the mobile computing revolution that’s taken hold in recent years with the advent of smartphones and tablets has made it much easier to put powerful audio-processing applications in the palm of your hand. The latest example of this phenomenon comes courtesy of a new iOS app called Echo Pitch:

Echo Pitch pitch-shifting multi-delay for iPhone. Echo Pitch has 4 delays where each delayed signal can be pitched one octave up or down in 1/2 steps, and can function as a 4 voice harmonizer. Echo Pitch also has a built-in looper, amp simulator and reverb. Each of the four delays can be routed into the other for incredible, swirling, ambient washes and otherworldly sounds.

The developers of Echo Pitch recommend that the app be used on an iOS device with an external audio interface, such as the IK Multimedia iRig or Fender Slide. The app is available for download in the iOS App Store for $3.99.

This video provides a good demo of the Echo Pitch app. 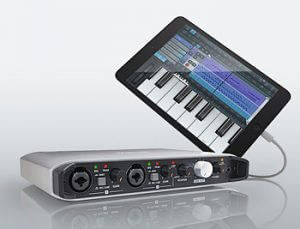 It’s become increasingly easier over time to capture and create audio in remote locations. No longer is it necessary to be tied to a room full of expensive gear in order to record vocals or produce instrumental tracks. Tascam’s latest digital audio interface, the iXR, was designed with this in mind. The iXR is extremely portable. Hence, it’s designation as “a music studio that fits in a bag”.

Tuscan’s iXR audio interface is a true solution for audio producers on the go. The iXR is MFI-compliant, so it can be connected directly to an IOS device via Lightning cable. No USB adapter required. Producers can use the iXR to quickly access a plethora of sound-related apps, such as multitrack recorders, effects processors, software synthesizers, and more. The iXR also has a standard USB 2.0 connection, so it can be used with desktop computers and other USB-ready devices.

The iXR comes with two built-in XLR/TRS jacks that allow for microphones or instruments to be connected directly to the device. There’s also onboard phantom power for use with condenser microphones. For monitoring, there’s a headphone jack as well as a pair of balanced line outputs that can be sent to powered monitors. The headphone volume jack works independently of the line outs, so these monitoring sources can operate at different volumes. There’s also a pair of standard MIDI I/O jacks for connecting keyboards and other MIDI-capable devices.

Pricing and release information are not yet available for the Tascam iXR.

Music and audio equipment manufacturer Line 6 revolutionized the guitar effects industry with the release of its POD effects processor nearly two decades ago. The company hasn’t stopped innovating since. When it was clear that iOS, the operating system that runs Apple’s mobile devices, could be used for more than just placing phone calls and sending text messages, Line 6 began developing a special POD-inspired app for iOS. Hence, the Mobile POD app was born. Mobile POD was recently updated to version 2.0.

The app comes packed with 65 classic amps and effects for dialing in the perfect guitar tone, Users can save preferred custom tones or choose from presets designed by Line 6 engineers. Updated UI combines ease of use with fast interaction, and features a dynamic layout that adapts to any iOS screen. Updated ergonomics offer immediate on-screen access to all parameter settings while simultaneously allowing for precise editing with a single finger.

With Mobile POD 2.0 and an iOS device and it becomes possible to practice, jam, or record anywhere. Need to lay down some guitar tracks at 2AM without waking the neighbors? Maybe head out into the wilderness (or just the backyard) to do some inspired composing? It’s all possible with this app from Line 6.

Mobile POD 2.0 is available as a free download from the App Store. To unlock all of the app’s features, a $19.99 in-app purchase is required.

Electronic media gathering in remote locations has become increasingly easier in recent years, mainly due to the versatility of mobile smart devices. Unlike a simple camera or digital audio recorder, a smart device can run apps that allow it to become a fully functional production studio. But most of these devices aren’t equipped with professional-level microphones. Equipment manufacturers have stepped in to bridge that gap. The latest to do so is Rode with the announcement of its i-XLR Lightning adapter that works with iOS devices.

The i-XLR connects any microphone to a Lightning-enabled iOS device using a three-meter long shielded audio cable. Having a cable this long allows the user to easily store their iOS device in a pocket or bag while having the mic out and ready to use. The i-XLR comes with a built-in headphone output for live monitoring and the device carries an additional 20db of input gain which is especially handy for use with dynamic microphones. The i-XLR also has a built-in record button as well as LED’s that show the record/pause status of a recording while being used with compatible audio apps.

The i-XLR is expected to ship later this year. Pricing has not yet been determined. 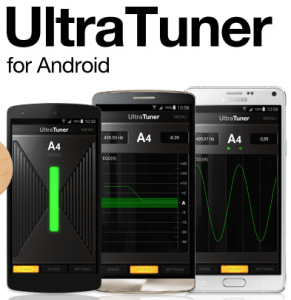 Gigging musicians were living the mobile-gear life long before everyone was walking around with high-powered computers in their pockets. This required many musicians, especially guitarists, to have to tote around a kit full of tools and accessories, with the guitar tuner being paramount among them. But what about those times when you’ve accidentally left the tuner at home? Used to be, if you were lucky, you could borrow one from a bandmate. Or hope that maybe the bass player is actually in tune and you could tune off of his instrument. Those kinds of hassles are a thing of the past thanks to apps like UltraTuner from IK Multimedia.

IK Multimedia has been making products for the mobile musician for years. But those products have been focused on iOS. For the first time, along with its new iRig 2 and iRig HD-A, IK Multimedia is bringing UltraTuner to the Android platform. UltraTuner can be used with one of the above interfaces or it can also be used with your device’s built-in microphone.

UltraTuner features an advanced note-detection engine that delivers accuracy down to +/- 1/100 of a cent, making it ideal for precision tuning and calibration of all instruments from electric guitars to analog synthesizers and beyond. UltraTuner achieves such fine results thru a patented note detection engine that utilizes a proprietary dual-analysis process to deliver frequency readings with incredible accuracy.