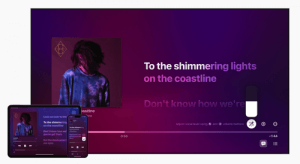 Apple expands its world-class lyrics experience with a new feature for fans to easily sing along to tens of millions of songs.

Apple introduced Apple Music Sing, an exciting new feature that allows users to sing along to their favorite songs with adjustable vocals in real-time lyrics. Apple Music Sing offers multiple lyric views to help fans take the lead, perform duets, sing backup, and more – all integrated within Apple Music’s unparalleled lyrics experience. Coupled with an ever-expanding catalog that features tens of millions of the world’s most singable songs, Apple Music Sing makes it fun and easy for anyone to participate, however and wherever they choose.

Apple Music Sing will be available later this month to Apple Music subscribers worldwide, and can be enjoyed on iPhone, iPad, and the new Apple TV 4K.

“Apple Music’s lyrics experience is consistently one of the most popular features on our service,” said Oliver Schusser, Apple’s vice president of Apple Music and Beats. “We already know our users all over the world love to follow along to their favorite songs, so we wanted to evolve this offering even further to enable even more engagement around music through singing. It’s really a lot of fun, our customers are going to love it.”

Adjustable vocals: Users now have control over a song’s vocal levels. They can sing with the original artist vocals, take the lead, or mix it up on millions of songs in the Apple Music catalog.

Real-time lyrics: Users can sing along to their favorite songs with animated lyrics that dance to the rhythm of the vocals.

Background vocals: Vocal lines sung simultaneously can animate independently from the main vocals to make it easier for users to follow.

Duet View: Multiple vocalists show on opposite sides of the screen to make duets or multi-singer tracks easy to sing along to.

Apple Music will also be launching a suite of more than 50 dedicated companion playlists featuring all of the epic songs, duets, choruses, and anthems that have been compelling people all around the world to sing – fully optimized for the Apple Music Sing experience.

Apple Music Sing will be available on all compatible iPhone and iPad models as well as the new Apple TV 4K. 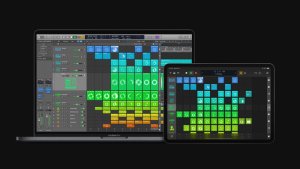 Apple unveiled a major update to Logic Pro X with a professional version of Live Loops, a completely redesigned sampling workflow, and new beat-making tools. With its collection of powerful creative features, Logic Pro X 10.5 will be a massive release for all musicians, including those producing electronic music.

With Live Loops on the Mac, Logic users can now create music in new freeform and nonlinear ways. Loops, samples and recordings can be organized into a new musical grid, where musicians can spontaneously perform and capture different arrangement ideas into the timeline. From there, tracks can be further refined using all of the professional production features in Logic.

Remix FX enhances Live Loops with an exciting collection of electronic effects like Bitcrusher, filter, gater, and repeater that can be performed in real time over individual tracks or the entire song mix. Both features become even more powerful when using the free Logic Remote app, allowing users to pair their iPhone or iPad with their Mac to provide Multi-Touch control over Live Loops and Remix FX.

Quick Sampler is a fast and simple way to turn any individual sound into a playable instruments. Musicians can pick a sound from within Logic, the Finder, Voice Memos, or even record directly into Quick Sampler. With just a few clicks, an imported sample can be trimmed, looped and played across a keyboard controller, with access to creative sound-shaping controls.

Logic Pro X 10.5 offers a collection of new creative tools designed to work together to make it fast and fluid to build original beats – an integral part of hip hop and electronic music production. These tools include: Step Sequencer, Drum Synth, and Drum Machine Designer.

Logic Pro X has been optimized to take advantage of the latest Mac hardware and the power of macOS, delivering incredible performance when working with the most demanding projects with thousands of tracks and hundreds of real-time plug-ins.

Apple has been under fire from professional-level users for some time. It’s been four years since the Cupertino-based tech giant refreshed its Mac Pro line, which may as well be a century in terms of modern computing. Many users have been wondering if Apple is abandoning the pro community for the more lucrative consumer smartphone/tablet market.

At last week’s Worldwide Developer Conference, most of Apple’s big announcements revolved around operating systems and other software updates. But there were a few hardware-related announcements, most notably, the upcoming iMac Pro. In some ways, the iMac Pro feels like a consolation prize for pro users. It’s overall a more up-to-date piece of hardware than the current Mac Pro tower. But it’s not the updated standalone upgradable CPU offering that most pro users are longing for.

Regardless of Apple’s intent in releasing a true pro-level iMac, the machine does have some decent specs at the base level. With a price tag of $4999, the iMac Pro is definitely not being aimed at typical college students or casual web surfers. And while that starting price tag might be worth it to some users, that is still the base model price. Which means it’s very likely it’ll be possible to spend much more on an iMac Pro.

Apple hasn’t released a price-based configurator yet for the iMac Pro. But one ZDNet writer decided to try and figure out just what a true tricked-out iMac Pro might cost. His conclusion: $17,324. That’s a pretty hefty price tag for a single computer. But it’d be an iMac Pro with all top-of-the line specs, which could be appealing to power users who need to do a lot of number crunching.

If you’d like to find out more about this theoretical maxed-out iMac, click the link in the paragraph above.

Phone-based photography is really becoming an accepted way to take everything from snapshots to professional-grade photos. It wasn’t all that long ago that camera phones were shunned for their poor image quality and lack of features. But most people don’t even own point-and-shoot cameras anymore because the cameras on their smartphones are good enough to be the only cameras they need.

Apple made a serious step up in its own camera phone technology with last year’s release of the iPhone 7 and iPhone 7 Plus. The cameras built into these phones contain the most advanced imaging hardware ever made by Apple (and some have argued, ever made for smartphones). I’m not sure if Apple is so thrilled with these cameras that they really want to make sure people know how to use them, or if they’re attempting some clever marketing to clear out old stock ahead of the release of a new iPhone later this year. Regardless, the company has released a series of short videos on YouTube to help iPhoneographers get the most out of their hardware.

This tutorial series is called How to Shoot on iPhone 7 and it contains five parts:

You can watch the entire playlist in under three minutes. These videos are quick and to the point. But they still contain plenty of that somehow-casual-but-still-well-produced vibe Apple is good at.

If you’d like to expand your skills with your iPhone 7/iPhone 7 Plus’s camera, this is a good place to start.

Line 6, the California-based manufacturer of popular musical instrument and audio production gear, made an official statement last week about a problem that users have been reporting for awhile. Spend even a short amount of time on any public forum dedicated to Line 6 gear and you’ll see multiple posts complaining about issues using Line 6 products with the latest build of Apple’s Macintosh operating system, OS 10.11 (“El Capitan”).

Line 6 sent an e-mail to registered users late last week acknowledging the issue. It’s the first time any official word has come from the company regarding the problem:

We apologize for the inconvenience and we will publish an updated driver soon.

The e-mail also provided a list of the affected Line 6 products. The list is rather long and contains most of the company’s popular products, including its PodHD line of effects processors and the M20d digital mixer. The only advice Line 6 is providing on the matter is to hold off on upgrading to El Capitan:

We highly recommend you do not update to Mac OS 10.11 El Capitan in order to maintain correct Line 6 USB audio driver functionality.

It’s not much of a solution, especially for those who’ve already upgraded their machines. Overall, it’s unfortunate that Line 6 customers have had to face this inconvenience. But it also shows why it’s a good idea to exercise patience in the face of these kinds of upgrades, especially for mission-critical gear.