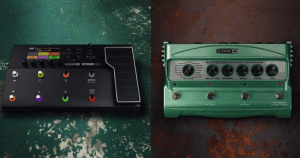 Line 6 has a promo on the POD Go or DL4. Purchase a POD Go or a DL4 and save $50 on a limited time instant rebate. The promo is valid through March 31, 2022. This promo is only available to Line 6 customers with mailing addresses in the United States.

POD Go and POD Go Wireless amp and effects processors get you on the road to ultimate tone via their ultra-potable and lightweight design, simple plug-and-play interface, and best-in-class tones.

The DL4 Stompbox Modeling Pedal contains 16 models based on legendary echo and delay boxes from the storied Maestro EP-1 Echoplex to the awesome T.C. Electronic 2290, the DL4 has in turn become a classic in its own right, as popular with guitarists as it is with singers, drummers, bassists, keyboardists, and anyone who wants a pure 24-bit true stereo signal path in the service of delays that run the gamut from gritty and psychedelic to pristine and heavenly.

You’d be insane to pack an original Roland RE-101 Space Echo or Electro-Harmonix Deluxe Memory Man into the back of your van for a club tour, but the DL4 packs models of those sounds and many more into a rugged, road-tested steel housing that can run for up to 30 hours on four “C” batteries or with the optional PX-2G adaptor.

Models of classic delay boxes – and the sweet choruses and vibrators that accompany many of them – are just the beginning; the DL4 also boats innovative sounds like its “Auto-Volume Echo,” which combines a volume swell with a tweak able tape-style echo; or the outstanding “Reverse Delay,” which allows you to play stunning backwards guitar solos on the fly.