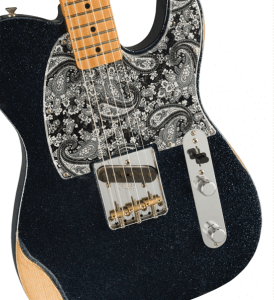 Fender Musical Instruments Corporation (FMIC) today released the new Brad Paisley Signature Esquire in collaboration with the multiple-Grammy-Award-winning country music superstar. Over the course of the guitar brand’s nearly 75-year history, the Fender Esquire has been used by generations of country musicians who prized its approachability and uncompromising tone.

With his second signature guitar, Fender honors both the storied history of the beloved model and a man who has made the Esquire iconic to fans of modern country music. Brad Paisley has used the Esquire guitar’s tried-and-true sound throughout a decades-long career which includes three Grammy awards, 24 No.1 hits, and over 3.9 billion on-demand streams making him the perfect partner for Fender to celebrate this guitar anniversary with.

“The Esquire is a streamlined, working-man’s guitar,” said Paisley. “It’s really important to me that you hear an echo of the past in the stuff that I do, and in that sense, this guitar encompasses what I try to do musically. It has a retro feel, but at the same time, it’s progressive, with a new style of pickup that hasn’t been done before.”

The signature twang of the Esquire and its later iteration, the Telecaster, has been heard on countless country albums and have helped to define the sound of the genre. In this spirit, the Brad Paisley Signature Esquire takes the elements that have made the guitar a staple and provides subtle upgrades to bring this iconic model into the future.

Historically, the Esquire model is know for featuring a single pick-up; making it perfect for country artists like Brad Paisley, as well as those seeking an affordable, but professional instrument at the outset of their career. In order to maintain this upstart spirit of the Esquire while giving musicians a greater sonic range, Fender has added a Seymour Duncan Braid Paisley Signature “Secret Agent” neck pickup. This pickup is hidden under a pickguard adorned in a custom paisley pattern – keeping the image of the instrument intact while delivering a robust pattern of sounds.

The Brad Paisley Signature Esquire features a lightweight Paulowina body with Spruce top and back, finished in a stunning black sparkle and given a RoadWorn treatment for a vintage look and feel. The maple neck with 9.5” radius fingerboard improves the playability over previous Esquire guitars but features a classic V-shaped profile in a nod to the guitar’s heritage.

American Professional compensated saddles in a vintage bridge show an attention to detail and quality, while the black paisley-patterned nods to the artist’s influence. And of course, the Seymour Duncan Brad Paisley Signature “Secret Agent” neck pickup maintains the aggressive spirit of the original Esquire, while giving the players tone options never before heard in the model.