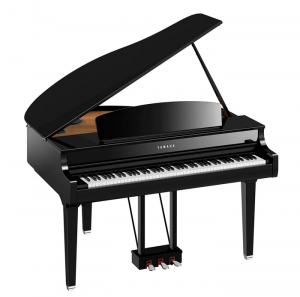 Five new models – the CLP-735, CLP-765GP, CLP-785, and CLP-795GP – offer unprecedented improvements to realism and playability, as well as new historical Voices that perfectly reproduce the fortepiano, an ancestor of the modern piano. This lets players practice using the same tones that legendary composers heard as they crafted their music, bringing a new depth of authenticity and immersion to classical repertoire.

Models beginning with the CLP-735 feature the clear, light Mozart Piano and lilting, sonorous Chopin Piano Voices, painstakingly sampled from Walter and Pleyel fortepianos respectively built in the 18th and 19th centuries. The CLP-785 and CLP-795GP add Scarlatti and Beethoven fortepiano Voices. The former was sampled from an instrument designed by the inventor of the piano himself, Bartolomeo Cristofori; the latter from a London-made Broadwood fortepiano.

Of course, the CLP-700 series also includes the Voices of today’s world-leading concert grand pianos: the Yamaha CFX and Bösendorfer Imperial. Both are offered in stereo and binaural versions. Binaural sampling is a recording process that “hears” as the human ears and head do. When either Voice is played through headphones, the sense of each note emanating from where it would on a grand piano is so accurate that players will forget they are wearing headphones at all. This increases enjoyment and time spent at the keyboard and is also ideal for multi-piano lab settings where students play side by side.

The Clavinova CLP-700 Series connects these Voices to musicians’ fingers with improved GrandTouch™ and GrandTouch-S™ keyboard actions that respond like a real grand piano because, in fact, their mechanisms are derived from the hammer action of a real grand piano. Synthetic ebony and ivory key surfaces are textured to help finger grip and wick away moisture. The illusion of playing an acoustic instrument is further perfected by Real Grand Expression 2 (RGE2). Exclusive to Yamaha, this revolutionary technology converts the slightest variations in touch into limitless dynamic and harmonic nuances.

The CLP Series has always maintained the dignified appearance of a traditional acoustic piano. With the CLP-700 Series, the upright and grand (GP) cabinet designs raise the bar for home digital pianos. On the CLP-785 and CLP-795GP models, the exclusive new Touch Sensor Control Panel is nestled in the left end-block. With the instrument powered on, white-on-black markings and a crisp LCD appear subtly on a flush, touch-sensitive surface. When powered off, the panel and display become virtually invisible.

Compatibility with the Yamaha Smart Pianist app allows access to all the CLP-700 Series’ control functions from a connected iOS® or Android™ device. On models CLP-745 and up, Bluetooth® wireless audio connectivity lets players stream songs from a mobile device or computer and play along with them through the Clavinovas’ robust, high-fidelity speaker systems.

The new Clavinova CLP-700 Series models will be available in the Fall of 2020 but be sure to check your local authorized Clavinova dealer for availability. Prices range from $2,299 to $7,499.