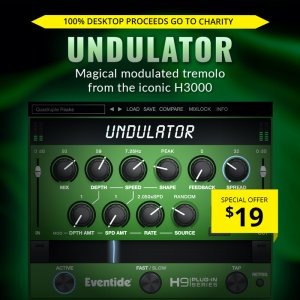 Eventide Audio is offering Undulator, on a special offer of $19. Eventide Audio is committed to supporting the fight against systemic racism and violence. They will be donating 100% of the proceeds of the Undulator desktop plug-in to the Equal Justice Initiative & NAACP Legal Defense and Education Fund.

Undulator is a unique, rhythmic effect combining ethereal feedback and detuned echos running through an AM/FM modulated tremolo. Transform ordinary synths, keys, guitars, and vocals into evolving pads, tempo synched production elements, or ethereal and fluctuant delays. Add Undulator into your plug-ins collection for the most playable tremolo-style effect on your DAW or iOS device.