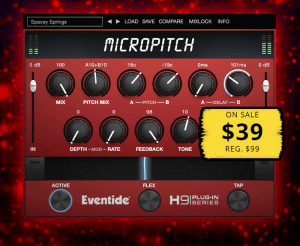 Eventide has introduced MicroPitch, a fine resolution pitch-shifter for stereo widening, special FX and new dimensions in sound. It is currently on sale for desktop for $39, and on iOS for $6.99.

MicroPitch is a fine-resolution pitch shifter for subtle tone fattening, plus delays for dramatic slap back effects. It can take you beyond the run-of-the-mill stereo spread effects and simple micropitch plugins. It goes above and beyond by allowing you to mix in detuned and delayed versions of your source, creating depth and dimensions not possible before. With its expanded controls you can achieve deep pitch dives, haunting echoes, and pristine chorusing effects.

The plug-in has been enhanced for experimentation and live performance and fine-tuned for your desktop, laptop, or iPad. It also promises much more tweak-ability than simple pitch shifting plug-ins. Tone, Modulation, and Feedback controls provide territory for ear-catching production techniques. Unleash the full range of MicroPitch’s parameters and you can discover rich repeating delays, thick modulations, and tempo-synced special effects.