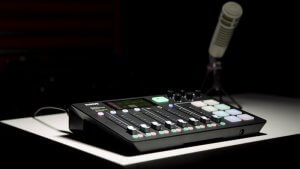 RØDE Microphones announced that the RØDECaster Pro Podcast Production Studio now has a brand new preset tailored specifically to the iconic broadcast microphone, the Electro-Voice RE20.

The RØDECaster Pro is the world’s first fully integrated podcast production studio. Whether you are just starting out, or are a seasoned broadcast processional, the RØDECaster Pro Podcast Production Studio is all you will ever need.

As part of their ongoing enhancement of the RØDECaster Pro’s firmware (which has already seen the addition of multitrack recording and many other powerful features since its release in 2018), the new preset further cements the console as the ultimate production tool for podcasters. Electro-Voice is a legendary company with a lauded history creating microphones for broadcast and studio use, they were also pioneers in public address systems and RØDE Microphones are proud to have them on-board.

Developed in collaboration with the Electro-Voice team, the preset was designed to make the RE20 shine in vocal applications on the console and interact seamlessly with the RØDECaster’s audio processing. It can be found in the RØDECaster Pro’s audio settings, alongside presets for RØDE mics (the PodMic, Procaster, Broadcaster, NT1 and NT1-A), as well as the universal presets for dynamic and condenser microphones.

The preset is available in firmware version 2.0.4, which can be downloaded from the RØDECaster downloads page.