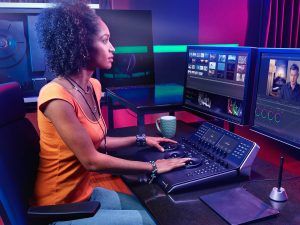 The DaVinci Resolve 14 update was designed to solve some of the bigger problems in post production. The first problem was performance. They have made some dramatic performance gains and DaVinci Resolve 14 is now up to 10 times faster than the previous release. It’s very fluid and much more responsive.

With DaVinci Resolve 14, they have built in Farlight audio on its own new page in the software. It’s incredibly powerful and can play back up to 1,000 tracks with parametric EQ, dynamics and plug ins on every track, all in real time, when used with the Fairlight Audio Accelerator card. It’s also very powerful when run on a stock computer system as well.

Because audio for film and television is a lot more complex, Blackmagic Design thinks integrating it into DaVinci Resolve will make it fast and easy. It’s just a button click away. Plus, it works with the full sized Farlight consoles so it makes an amazing combination.

To make this workflow really fast, you want people to be able to edit, color and do audio post production all working together, on the same job at the same time. To make this easy, DaVinci Resolve 14 now integrates extremely powerful collaboration tools to make that easy.

With editing, advanced color correction and these new Farlight audio tools, DaVinci Resolve 14 is like getting 3 high end applications in one. The performance improvements and new audio features are built into the free DaVinci Resolve software you can download for free. However, the new collaboration tools and some of the plug ins are only available in the paid DaVinci Resolve Studio.

Blackmagic Design has now reduced the price if the full DaVinci Resolve Studio to $299 so that it is much more affordable. It can be purchased on the BlackMagic website.