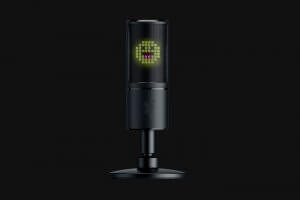 Razer introduced the Seiren Emote microphone. It was designed for streamers who want to show their microphones on stream and entertain their viewers.

Wow your followers and take your showmanship to new heights with the Razer Seiren Emote – the world’s first USB microphone that uses emoticons to interact with your audience. Keep your streams fresh and fun, and have them coming back for more with an extra level of entertainment that lets you stand out from the rest.

The Razer Seiren Emote microphone works with the Streamer Companion App. You can customize how you use the app to create unique audience interactions with supported Razer hardware. Design your own emoticons and lighting effects with the app’s editor.

With the Streamer Companion App, you can add a new level of audience interaction and have emoticons trigger on the Razer Seiren Emote during different parts of your stream. You can decide when and what emoticons appear on the microphone, and use it to indicate that there has been a new follower or a new sub.

The Seiren Emote microphone has an 8-bit Emoticon LED display powered by Razer’s Emote Engine, which includes a huge collection of over 100 animated and static emoticons.

At its core, the Razer Seiren Emote is a USB microphone designed to record crystal clear, broadcast quality audio. Using a hypercardioid pickup pattern, it’s focused and sensitive enough to capture the nuances of your voice, picking up the smallest shifts in tone while eliminating any background noise that might bring down your stream’s sound quality.