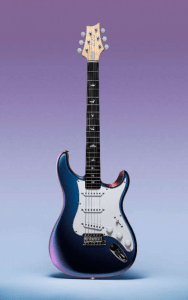 Ever since Mayer was seen playing his signature Silver Sky with a maple fretboard this past summer, there has been much conjecture as to whether this would become a catalog model for PRS or not. And after much anticipation, PRS is pleased to confirm that the Silver Sky will now be offered with the option of a maple fretboard.

The maple fretboard Silver Sky will maintain the original 635JM neck shape and 7.25” fretboard radius, and is now offered in eight finish options, including the original Frost and Tungsten as well as the more recently added Dodgem Blue, Golden Mesa, Moc Sand, Orion Green. For 2020, Silver Sky models will also be offered in brand-new Midnight Rose and Polar Blue colors.

Limited to only 500 pieces worldwide, the Silver Sky Limited Edition in “Nebula” finish is another exciting offering from PRS Guitars in 2020. This premium limited-edition is outfitted with a antique “flip-flop” finish that reflects hue and light differently at different angles.

The polychromatic finish accentuates the lines of the Silver Sky’s body and gives the guitar a dynamic look that is both delicate and powerful. Perfectly timed with the start of a new decade, this finish also reflects the Silver Sky’s goal to redefine what a vintage-inspired guitar can be and shift the focus to the future.

The original Guitars of the Month were cased between December 1994 and March of 1996. They provided Paul Reed Smith Guitars the opportunity to experiment with new ideas. The program led directly to the Private Stock and to the creation of the Private Stock program with the first “official” Private Stock instrument casing on April 19, 1996.

The Private Stock Maple Top Singlecut Archtop is the third instrument in Paul Reed Smith Studios 2016 Guitar of the Month project. The Private Stock Archtop was released in the fall as part of the 2016 model year. It delivers tone, playability, and elegance to pro-level players and collectors alike. The addition of a maple top adds a new aesthetic and tone to the instrument while keeping exceptional resonance and articulation.

* Fretboard Wood – Ebony with Mother of Pearl Purfling on the Fingerboard