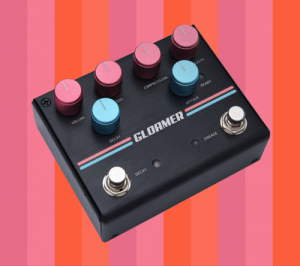 PIGTRONICS introduces Gloamer, an all-analog, polyphonic amplitude synthesizer that alters the attack and decay time of any sound source without sacrificing the fidelity of the original tone. Its attack function provides a pick-triggered volume swell: a cinematic “slow gear” effect that is smooth and controllable with variable timing from extremely fast to very slow.

The volume swell cycle can be reset at any moment by muting, allowing players to craft bowed string-like lines and chords with ease. Gloamer also features a powerful optical compressor that can add subtle punch or extreme sustain, helping to maintain a smooth volume swell effect even with very long attack times.

A Volume knob controls loudness at the peak of the attack cycle, while a master Blend control allows players to layer an uncompressed clean sound in with the volume swell effect. Additionally, when activated, the Decay function causes notes to fade out once the attack cycle is complete.

When the Decay cycle is completed, an auto-reset function causes the attack to begin again immediately, as long as there is audio input. This allows you to create a wide range of undulating, asymmetrical tremolos at slower settings as well as pulsating stutter effects when using faster attack and decay times.

Volume: Sets the master output volume of the effect when engaged.

Compression: Determines the balance of clean and compressed signal.

Blend: Determines the balance of clean signal and effect.

Attack: Determines the duration of time it takes for a note to swell from silent to full volume.

Decay: Determines the duration of time it takes for a note to fade out from full volume to silence

Sensitivity: Determines how much input signal is needed to reset the attack and decay cycle.

Ready (LED): Signals when the pedal is armed and ready to begin the attack and/or decay cycle.

A HI-Fi ATTACK AND DECAY MASTER

Gloamer was designed to allow players to change the nature of their attack and decay while maintaining pristine, hi-fidelity audio. Easily swell blooming single note lines or full, lush chords and become the string section you’ve always wanted to hire but can’t afford.