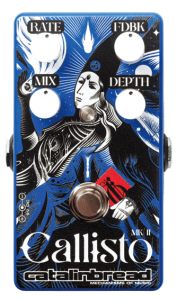 Catalinbread introduced the Callisto MKII, an all analog chorus featuring a feedback control that can blur the line between chorus and flanger. It is priced at $209.99, and has a three year warranty.

After spending some time on the operating table, we are proud to release the Callisto MKII back and better than ever. We’ve painstakingly recreated the robust engine of our original and added in some extra features, too. For starters, the Callisto MKII is still 100 percent analog just like the original for some classic trembling warmth you can really feel. Just how much wobble you want can be dialed in with the Mix control, which achieves 100 percent wet or dry in either direction.

Turning it all the way up delivers a wonderfully-tuned pitch vibrato that can add some spice to your solos or some disorienting tape-like warble for your next bedroom pop record. Classic Rate and Depth controls go beyond the basic two-knob chorus and into hi-fi territory that makes your guitar shine and sound equally great for both lead and rhythm applications, or any other instrument you find may be lacking in thickness.

We’ve also taken the liberty of adding a cool Feedback control, which dumps a varying amount of signal from the output of the BBD chip back into the circuit after the filtering occurs, for a striking regenerative tone that blurs the line between chorus and flanger, even if it never quite reaches the latter. That sound and many others live inside the Callisto MKII within its intuitive set of controls.

FDBK: Sends the modulated signal back into the input of the bucket brigade. Turn all the way down for the cleanest chorus sound; turn up for more intense modulation and phase shift/flanger type sounds.

MIX: Controls dry/wet mix. Keep at noon for classic chorus sounds, turn down for more subtlety and up for true pitch vibrato sounds.

DEPTH: Controls the amount that the wet signal is modulated.

Signal Chain Placement: The Callisto MKII can accept very hot signals with ease, including effects loop outputs, so running it after your dirt just makes sense. If you have other mod pedals, the order in which they are arranged among themselves is not crucial, so feel free to experiment!

The Callisto MKII ONLY accepts a 9V center-negative DC power supply capable of supplying at least 10mA of current (over is fine). Plugging in anything other than this (center-positive, AC, higher voltage) will ruin your pedal. Plugging in the wrong power supply will void your warranty. Don’t do this!