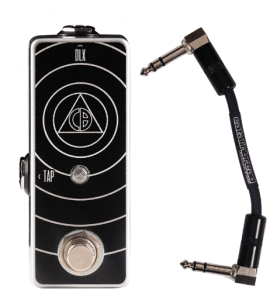 CatalinBread announced the CB Tap. It is their external tap tempo mechanism that was built to connect to their Belle Epoch Deluxe. The CB Tap not only adds tap functionality to the Belle Epoch Deluxe, but also connects to anything with a tap-tempo out (excluding BOSS pedals and other non normally-open taps).

The CB Tap comes with a Catalinbread-branded six-inch 1/4” TRS patch cable to connect it to whichever pedal you decide to use.

To use the CB Tap with the Belle Epoch Deluxe: Plug one end of the 1/4” TRS cable into the expression output of the Deluxe and the other end into the “DLX” input of the CB Tap, then start tapping and the LED indicator will follow along.

To use CB Tap with another pedal (even simultaneously as the Deluxe): Plug one end of the 1/4” TRS cable into any non-BOSS pedal’s tap out and plug the other end into the “Tap” input of the CB Tap, then start tapping. The LED indicator will not light up when using non Deluxe pedals.

The CB Tap will set a delay time which can then be multiplied into uniform subdivisions by adjusting the “Echo Delay” knob.

The CB Tap is priced at $65.00. Catalinbread offers free domestic shipping and a 3-year warranty. Shipping times are slower than expected, due to COVID-19.