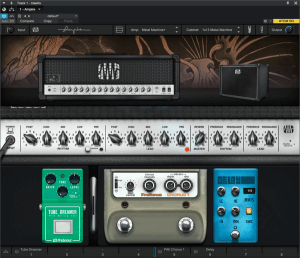 State Space Modeling is a mathematical method of transferring each component of an existing analog circuit into the digital domain, while maintaining the unique sonic characteristics of the original hardware.

The two new amp models include: the Metal Machine +, a high-gain British tube amp with 120 watts of raw power across two channels; Painapple #4, an all-tube British amp featuring a three-band EQ and four stages of high gain; and the Gazoline EMC2, a versatile German amp with two channels and a three-way mode switch.

The six new State Space Modeled pedal effects are compatible with both Ampire and Pedalboard plug-ins. They include: