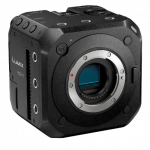 Against a background of increasing streaming opportunities in addition to traditional broadcasting, Panasonic offers the LUMIX BGH1, an easy-to-install camera with high expandability allowing multi-camera control. It can be used in a variety of ways from shooting on drones to IP remote control to live streaming and more.

The LUMIX BGH1 is a compact, light-weight box-style camera. Its body is composed of aluminum and magnesium alloy to ensure durability and light weight. The LUMIX BGH1 has a new heat dispersion structure to achieve unlimited video recording. It offers Power over Ethernet + (PoE+), simplifying installations by providing power, signal and control over ethernet.

Control over a maximum of 12 LUMIX BGH1 cameras is available from the Panasonic LUMIX Tether for Multicam application. A future firmware update will support IP streaming over wired ethernet [RTP/RTSP].

The included ethernet port or the USB 3.1 Type-C, 3G-SDI and HDMI Type-A terminals can all be used for simultaneous output. Genlock IN and Timecode IN/Out functions simplify multi-angle synchronized video recording and integrate into a scalable system with external monitors, rigs and gimbals supplied from other manufacturers.

The LUMIX BGH1 will be available at valued channel partners in December for $1,999.99.