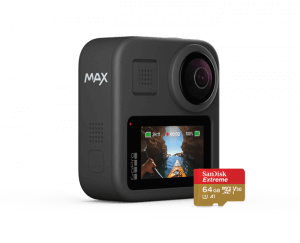 GoPro released an update for its award-winning MAX 360-camera that unlocks awesome new options for spherical video and photo capture. New features include the addition of 3k at 60 frames per second, Time Lapse Video and Time Lapse Photo, all in 360 mode.

The availability of 3K video at 60fps gives users more flexibility when filming things that are action-oriented or anything that simply would look cool in slo-mo, from speeding down a mountain to simply tossing a frisbee. This 2x slow-mo mode also allows for more time to pan and zoom around the frame while the action is happening so you can get the perfect shot.

Also new is the addition of 360 Time Lapse Video and Time Lapse Photo – features already available in the single-lens HERO mode and now brought to spherical capture. Time Lapse Video mode in 360 means users have more interval options for capturing longer periods of time – ideal for a sunset or a scenic drive.

Time Lapse Photo is an exciting addition because it enables hands-free 360 photo capture during activity. Prior to this update, a MAX user would have to press the shutter button to capture a 360 photo, but in Time Lapse Photo mode, creators can select a single photo from all the shots taken or use the footage to create an actual time lapse.

“3k60 video enables more diversity in what you can capture and play back, particularly in high action scenarios,” noted Abe Kislevitz, Creative Director of Media and also one of GoPro’s earliest employees. “Adding time lapse video and time lapse photo provides additional options for shooting activities or moments with a greater amount of creative control.”

An additional feature of the new update extends horizon leveling capability in single-lens HERO mode to TimeWarp and Photo modes, allowing for more freedom in mounting and shooting without the worry of horizon lines.

An integral part of the MAX experience is the GoPro App – a one-stop mobile editing tool for 360 content that transforms footage into polished images and edits. The new firmware update allows for faster offload of MAX content to the GoPro App, which means you get to share more quickly.