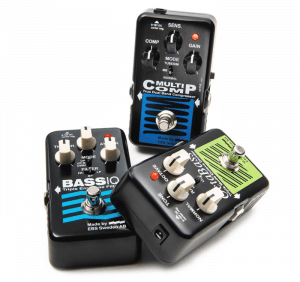 EBS released new “Blue Label” versions of three legendary pedals; the MultiComp, OctaBass, and the BassIQ. These pedals were first available before Christmas of 2019. They were released at NAMM 2020 as an “unofficial” US launch.

The MultiComp is the best selling EBS pedal ever. It is famous for its super intuitive interface and smooth compression that allows for dynamic playing even when the compressor is engaged.

With the new version, a Sensitivity control has been added to adjust the sensitivity of the effect to comply with the output level of your instrument and playing style. If used to a previous version of the pedal, a center click indicates the factory setting of earlier editions.

The new Tone control adjusts the character of the octave sound with improved accuracy and more versatility than before.

“Its the pedals touch sensitivity that provides full-filter fun factor”, Bass Player magazine summarized their review of the original BassIQ. That statement captures the essence of the BassIQ – both then and now. The difference is that the new Bass IQ is charged with more possibilities to create an amazing range of envelope effects.

With a new control for the Q value, you will quickly and easily set the sharpness of the effect. With the new filter switch, you can run every setting in Full Range, or with a Band Pass, or Low Pass filter engaged to expand the palette of sounds.