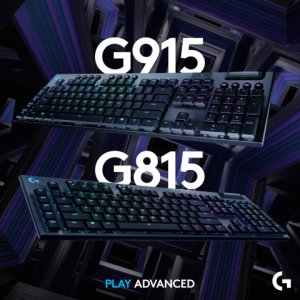 For the first time in the gaming industry, Logitech G is offering its next-generation LIGHTSYNC RGB lighting on a LIGHTSPEED Wireless keyboard. With LIGHTSYNC, this keyboard can be personalized across approximately 16.8 million colors through Logitech G HUB Advanced Gaming Software for the most immersive RGB gaming experience. With RGB colorwave enabled, gamers can play for over 12 days on a single charge (assuming eight hours of play per day).

The ultra-thin, wired G815 LIGHTSYNC offers the same great style and finish of the G915 LIGHTSPEED, with five dedicated, programmable G-keys, up to three on-board profiles and Logitech G’s LIGHTSYNC RGB technology, customizable through Logitech G HUB. Additionally included is a USB cable that connects the USB 2.0 passthrough port to its own input for 100 percent power throughout.