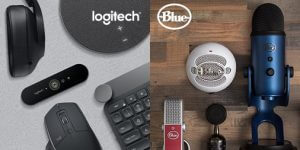 Logitech announced that it has agreed to acquire Blue Microphones, a leader in studio-quality microphones for the past 20 years. Logitech said they love Blue and their products from the moment they discovered them, and are convinced that Logitech and Blue can do great things together.

CEO of Logitech, Bracken Darrell said: “Logitech’s acquisition of Blue Microphones will accelerate our entry into a growing market, and offers another way for us to help bring people’s passions (from music to blogging) to life. Joining with Blue is an adjacent opportunity for us – a new way to grow – with additional synergies relating to our existing gaming, PC webcam and audio categories. It’s exciting!”

Blue Microphones announced that Logitech has plans to acquire Blue Microphones. CEO of Blue Microphones, John Maier, said: “With Logitech’s vast resources and incredible reach, Blue will be on a much bigger stage from the beginning. The end result is fulfilling our ultimate purpose – helping as many of our users find and amplify their voice as we can!”

The announcement from Blue Microphones has some information about the deal. It says that “all of us” at Blue will keep creating cool stuff for professional musicians, gamers, podcasters, YouTubers, and streamers. It also says Logitech will help Blue conquer the world.

The Verge reported that Logitech announced that it is acquiring Blue Microphones for $117 million. It is an all-cash transaction. The result will be that Blue and its products will join Logitech’s existing portfolio of brands.