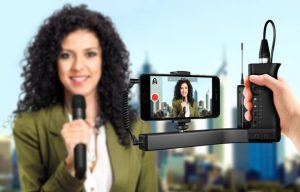 IK Multimedia has launched the first smartphone broadcast mount for pro-quality audio/video. It is called the iKlip A/V. With iKlip A/V, you can take your best shot, capture your best take and get professional broadcast-ready results with just your smartphone and your favorite microphone. The iKlip A/V is now shipping.

The iKlip A/V gives broadcasters, videographers, and digital storytellers the ability to capture and monitor professional-quality audio for their videos on the go using its integrated high-quality XLR mic preamp with phantom power and built-in wireless receiver support. It also helps deliver a steady picture thanks to its secure smartphone holder and ergonomic handgrip.

It features an integrated microphone preamp with phantom power that lets you use a high-quality external microphone for audio capture. Simply plug your microphone or wireless receiver into the preamp’s XLR input, then plug the 1/8” TRRS cable into your smartphone’s headphone/mic jack. The iKlip A/V provides 48v of power via two AA batteries and also features built-in support for holding the most popular wireless microphone receivers.

The iKlip A/V features a large ergonomic handheld grip and expandable smartphone holding bracket that shares the same technology as IK’s Xpand Mini and the iKlip Grip for ultra-steady shooting. It can securely hold any iPhone, iPod touch, or Android devices with a screen size from 3.5” to 6”. The iKlip A/V can also be attached to a monopod or tripod thanks to the standard female threads on the underside.

The iKlip A/V is available now from photo/video, music, and electronic retailers worldwide, and from the IK online store, for only $/€ 179.99 (excluding taxes). It is now shipping.